John Billheimer’s Field of Schemes is an inside-the-park home run, and the only reason I don’t call it an out-of-the-park home run is that it would be an insult to call this new series anything but the most exciting play in crime fiction.

To think of Field of Schemes simply as a baseball book vastly underrates the rich seams of observation and plot.  Seeded with humor and peppered with wisdom, John Billheimer expertly mixes fresh takes on drugs in sport, game rigging, gambling addiction and the affection of a father for his son.  There’s baseball, yes, and his touch with the game is sure, but readers whose interest in the national pastime is slight will still have plenty to savor and enjoy.

Field of Schemes is a performance-enhancing read. Billheimer comes through in the clutch again.

Finally, a book you CAN judge by its cover. Or, at least, the clever title and imaginative artwork. John Billheimer has always written about offbeat heroes, and Lloyd Keaton is another great one: small-town sportswriter, lover of baseball, and recovering gambling addict. Mix in allegations of steroid use on the AAA team he covers, and Field of Schemes will warm the heart of any reader.

As a jock there’s nothing I like better than a book that exposes the dark side of pro sports.  John Billheimer knows baseball up, down, and sideways, and writes about the people involved and the pressures they’re under with a sure hand.  A sweet, smooth, satisfying read.

Huntington-born mystery writer John Billheimer, who now makes his home in California, is packing his bags for a trip home to his native West Virginia. When he arrives, he’s going to find himself mighty busy. See entire review

When a baseball trainer is asked by his players for steroids, he mixes up an innocent placebo of cold-cream, sunscreen, and lemon juice. But when the team’s top hitter tests positive for steroids, and later dies of an overdose, the trainer faces humiliation, shame and criminal charges. The novel’s hero is Lloyd Keaton, a third-generation sportswriter (his grandfather broke the Black Sox Scandal in 1919) with a gambling problem. When Keaton tries to clear the trainer’s name, he finds himself opposed on one side by mobsters, and on the other by a U.S. Senator with a McCarthyesque zeal to root out steroid abuse, no matter whom he hurts along the way. Personal subplots are often annexed to stories like a third arm. But in Field of Schemes, the multiple subplots involving race, family, and addiction are seamlessly interwoven throughout the book, running parallel to, while enhancing, the central plot. With strong dialogue, rich characters, and passionate storytelling, Billheimer hits this thoroughly engaging story out of the ballpark. 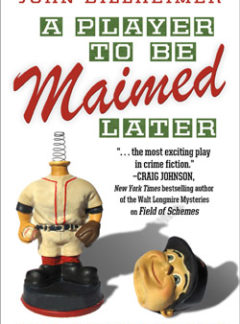 A Player to be Maimed Later